We began building our house in May 2004. We purchased stock blueprints and made changes to personalize the house for ourselves.

We hired someone to do the excavation and concrete work on the basement, but as soon as that was done, the house became our family project. Mike did most of the work, since he understood the blueprints, but when he needed extra hands for lifting a wall or hammering, various members of the family would help.

Our original hope was that the house would be off the grid, producing all of its own power via solar panels. Due to cost, we were not able to do that. However, to make the house as energy efficient as possible, the outer walls are all six inches, rather than the usual four inches. This provides an extra two inches of insulation, which works so well (along with a good passive solar design) that on even the coldest days, the heat does not turn on at all if the sun is shining.

In fact, the temperature in the house may actually go up one to two degrees on especially sunny days.

The insulation was one of only three things for which we hired contractors, because it had to be installed with special equipment. The insulation is made of ground-up newspaper and was blown into the walls. One of the things we liked about this type of insulation is that the person installing it was wearing blue jeans and a sweat shirt, rather than special clothing, because the material is not hazardous to human health. And no, this is not the old-fashioned cellulose insulation that settles over time. After 13 years, every spec of newsprint is still in place.

For heating our house, we chose in-floor heating.

Thousands of feet of tubing run through our floors, and hot water runs through the tubes. An extra 2X4 was added at the base of all the walls, and that area was filled with a light-weight concrete that encases the tubes. The water is supplied by a 95% efficient, gas hot-water heater. (Most gas water heaters are only 60-65% efficient.)

On December 30, 2004, we moved into the house, even though it was far from complete. We had a buyer for the mobile home, however, which is why we moved in early. At the time we moved in, we had no floor coverings over the concrete, and most of the rooms did not have drywall, but we did have a functioning (although incomplete) kitchen and a bathroom. Over the next year, we finished putting up drywall and putting down floor coverings. All floors are covered with either ceramic tile or engineered wood (kind of like plywood planks) glued to the concrete. A couple years later, we added a deck on the back of the house so we could enjoy the pond on summer evenings.

As of early 2018, the house is mostly finished except for the staircase, baseboards and trim on windows and doors, which has been the case for too many years to count. We’ve discovered that when you live in a farm, there is always something more important that needs to be done instead of cosmetic work inside your house such as trim. If we had any advice to offer someone else who was building a house, it would be this: do NOT move into your house until it is finished! 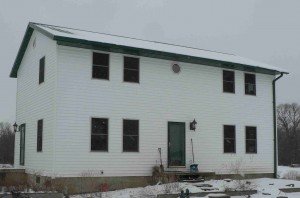