Antiquity Oaks is a farm from the past, and we hope the future. It is not like commercial farms of today, which are large factories that produce animals using the “economy of scale” philosophy that was successfully used to create automobiles and other industrialized products. People are beginning to realize, however, that producing automobiles and producing food require a different kind of philosophy.

When we moved here in 2002, we didn’t know anyone who was homesteading the way our grandparents did, so it took an enormous leap of faith to just do it — to raise turkeys without daily doses of antibiotics, to let pigs live in a pasture, to grow vegetables without pesticides, and to make all of our own dairy products. More than one person told us we were proposing something that was impossible. Pig farmers said, “You have to give pigs vaccinations or they’ll get a nosebleed that will never end, and then they won’t gain weight.” Books on raising poultry said, “Turkeys must be fed medicated feed, or they’ll die.” Goat breeders said, “If you let goats raise their own babies, they’ll be wild, and you’ll never be able to milk them.” 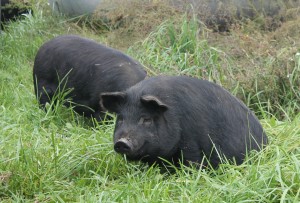 Most of our new neighbors thought we were completely nuts — not only because of our lack of experience and obvious absence of chemicals, but also because of the animals we chose. We eschewed broad-breasted turkeys, Cornish-cross broiler chickens, industrial Leghorn laying hens, and Holstein dairy cows in favor of heritage animals. When farming neighbors in their 60s stopped by to visit, they saw animals that they had never seen before, because they had only seen the industrial breeds of livestock. Industrial agriculture produces a single-best breed of every animal to raise, ignoring the rest, and ignoring the risk of extinction. Sadly, many breeds of farm animals have become extinct, and many positive genetic traits have become rare.

I once met an old farmer who said that on his grandparent’s farm (people born in the 1800s), you could walk into the pasture and milk a cow standing there in the middle of the grass. If a cow didn’t have that kind of personality, she was hamburger. They bred for personality, and they culled animals that didn’t have the personality they wanted. Personality is completely irrelevant on a 7,000-head dairy farm. The only thing that matters is production. 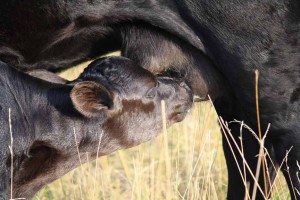 When choosing animals for our farm, we look for the same traits our ancestors prized — good personality, great foraging ability, easy birthing, and good mothering instincts. These are things that are not found in “improved” breeds used by modern agriculture. Modern ag doesn’t care if animals can forage because they’re raised in big buildings. They don’t care if they can easily give birth because they can do cesareans or “pull” babies, and mothering instincts are irrelevant and unknown because they don’t allow mothers to raise their own babies. So, modern ag didn’t purposely breed out these traits — they simply ignored them because they focused on traits such as feed-to-meat or feed-to-milk conversation ratios, and as a result, lots of bad traits were perpetuated.

We are an anomaly in the 21st century because we have a diversified farm — like virtually every farm in this country before World War II and the industrialization of agriculture. Like farmers throughout time, we can feed ourselves. Today, there are pig farms, egg farms, or turkey farms. Modern farms do not have more than one animal. I know farmers who don’t eat the animals they raise or drink the milk their cows or goats produce. They don’t have both animals and crops, and food animals today are raised indoors and never see the sunlight. This creates a number of problems. Modern hog and poultry farms need high-tech solutions to handle manure, and corn and soybean farmers use chemical fertilizers because they don’t have animals to fertilize their fields naturally. Because animals live in filthy, crowded conditions, they need daily doses of antibiotics to stay healthy. Farmers buy pesticides because there are no birds outside to eat bugs.

On Antiquity Oaks, most manure falls in the pasture, where it fertilizes the grass. We have never used any commercial fertilizer in our pasture, yet we grow a thick field of lush grass, which feeds our animals. Manure from the barn is composted for the garden, creating a rich fertilizer naturally. On a diversified farm, everything works in symbiosis, meaning that together, everyone achieves more than what anyone could achieve alone. Turkeys love those Japanese beetles that destroy fruit trees and vegetable gardens. Chickens adore ticks, slugs, and grubs. Ducks eat mosquito larvae. Goats love thistle and other weeds. Llamas chase coyotes, protecting the sheep and goats. Barn cats eat mice. Goldfish eat algae in water troughs. Modern agriculture believes that nature causes problems. We believe nature provides solutions. Everything in this world was balanced for centuries, and humans have created a lot of problems trying to improve on something that was practically perfect. We don’t have all the answers, because sadly a lot of that knowledge died with the farmers of yesteryear. But we’re confident that the answers can be found in a natural system, and our goal is to find those answers.