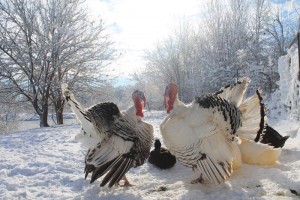 We have raised most of the different varieties of heritage turkeys since 2002, including royal palms, bourbon reds, slate, lavenders, Narragansetts, and Spanish blacks. For the past few years, we raised Royal Palms because they are easy to process on farm ourselves due to their smaller size, although we do still use a USDA certified processing plant for turkeys that we sell.

In 2010 and 2011, we raised White Holland turkeys. Although they are white like supermarket birds, they are a heritage breed and are more scarce than slates, bourbon reds, black Spanish, or standard bronze, which we have also raised. We usually stayed away from white poultry because they’re a blinking beacon for predators, but we raised the Holland turkeys in moveable pens, also known as chicken tractors. 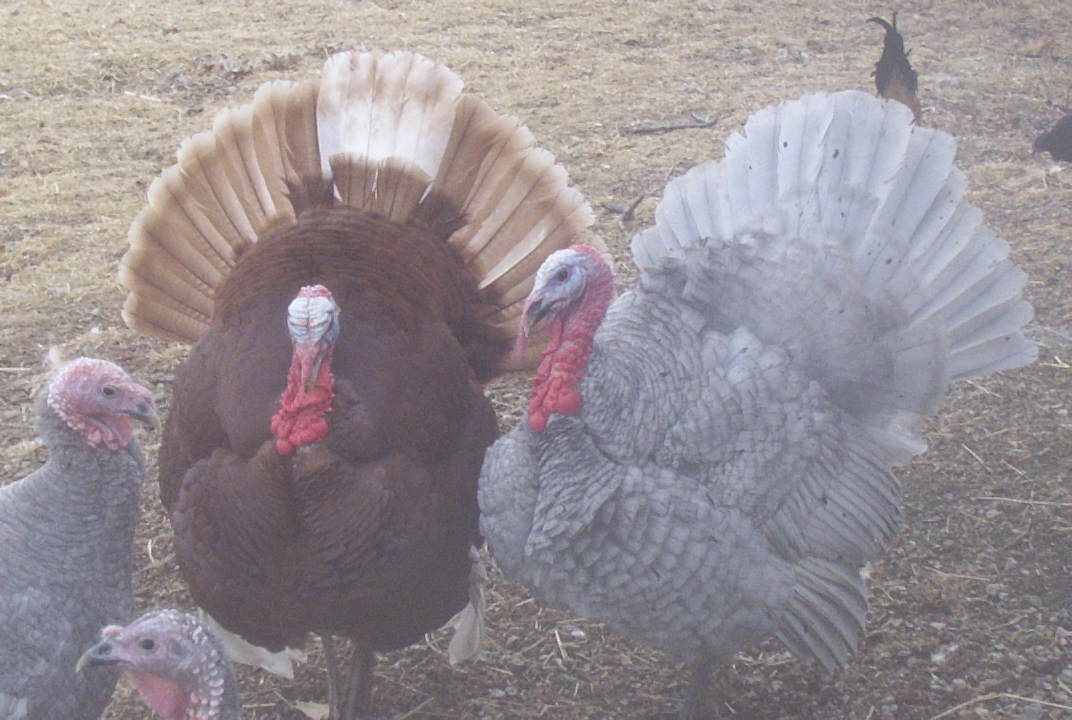 From 2006 to 2008, we raised blue slate heritage turkeys. We have previously raised bronze, royal palm, and bourbon red turkeys, and we even started raising Narragansetts once, but we lost all 25 to predators. We started with bourbon reds and blue slates in 2002, but due to the docile nature of the slates, the bourbon red gobblers kept trying to kill the slate gobbler. After nursing him back to health twice from a near-death experience, we think he was either brain damaged or intimidated to the point that he would no longer mate the females. Finally, we gave him to someone who just wanted a beautiful tom turkey strutting around her yard. Without a slate gobbler, we focused on breeding the bourbon reds for a couple of years. But then when we saw that the bourbon reds had graduated from the endangered list to a watch list, we decided to return to our first “true love” – the blue slate – because it was still critically endangered. After the slate has increased in numbers, we decided to focus on the white Hollands for a couple of years. 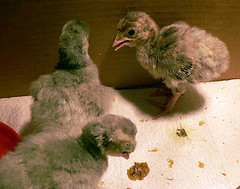 I fell in love with the heritage turkeys the first time I saw them, and I thought the blue slate and lavender were the most beautiful. (Blue slates have a few black spots scattered through their feathers, whereas the lavenders are pure blue.) They are much lovelier than the broad-breasted white turkeys that are raised by the millions on factory farms. They can run and fly, and they can breed naturally — things that modern turkeys cannot do! Yes, that means supermarket turkeys are all the product of artificial insemination.

Heritage turkeys graced dinner tables in this country for many generations until the 1950s. It is written that Abraham Lincoln received Narragansett turkeys as gifts on several occassions. Unfortunately, heritage turkeys were in danger of extinction less than a decade ago — fewer than 2,000 could be found in the entire United States — because factory farms only raise the broad-breasted (also known as double-breasted) white turkeys that were developed in the 1950s to grow bigger, faster, and cheaper. Small family farmers and organizations such as Slow Foods and the American Livestock Breeds Conservancy took an interest in these beautiful animals, realizing that the way to save a rare bird is to create a market for it! Chefs in New York, Los Angeles, and Chicago have done side-by-side taste comparisons between the factory-farmed big boys and the heritage turkeys and unanimously declared the heritage turkeys to be moister and tastier.[/vc_column_text][/vc_column][/vc_row][vc_row][vc_column][vc_column_text]

[/vc_column_text][vc_tta_accordion][vc_tta_section title=”What’s the difference between the different breeds of turkeys?” tab_id=”1448850919247-c44808fa-6d6c”][vc_column_text]A heritage turkey is defined by the Livestock Conservancy as one that can fly and can mate naturally. Supermarket turkeys (broad-breasted whites) can’t do either of those things, because their breasts are too large. Heritage turkeys also come in a variety of colors, as well as white. It is important to understand that color does not make a heritage turkey. There are broad-breasted bronze turkeys that cannot fly or mate naturally, and there are standard bronze turkeys that can do both. There are also white turkeys that can fly and mate naturally, but the modern white commercial turkey cannot.